I’ve been lucky enough to work on a number of cool events and progressive projects over the years. But I have to say that this one is certainly standing out as particularly badass. Just check out the clip above.

I first met with Fred Fugen and Vince Reffet, a.k.a. the Soul Flyers, back in april 2013. They had this crazy idea to jump (skydive) over the iconic Mont Blanc at very high altitude, execute a freefly routine, open their parachutes and “swoop” the entire mountain with their super fast, super maneuverable canopies. A visionary idea if you ask me, and one that they convinced Red Bull to bet on. Soon enough the project began to shape, and challenges arose: Fred and Vince would be dealing with extreme cold, lack of oxygen, legal and aeronautical uncertainties… and as a production partner and director on the project, I was challenged by the extreme difficulty to document the performance given the very hostile environnement, and a rather complex story to tell through short, action-packed clips.

Indeed I immediately realized that the more I learned about the project, the more impressive the performance became. Without a minimum of context it could appear as “just” a high-altitude skydive with some oxygen masks on. The invisible challenges needed to be deciphered for the audience: extreme cold (-50°c), lack of oxygen (I learned a great deal about hypoxia and the 20-30 seconds of useful consciousness you have at 10’000 meters if you’re deprived from an oxygen supply), airspace regulations… and the list goes on. Oh, and did I mention that Fred and Vince would be flying at nearly 100 km/h just meters away from one of the most inhospitable mountain in Europe? these guys have become my new idols. Like, you know, you’d want to be them, fly and have as much fun as they do, and master their sport in such a cool yet innovative way. 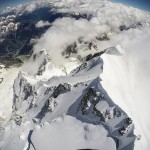 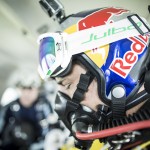 The whole project took more than a year to come together. This long and meticulous preparation has been documented and you can get a glimpse of these guy’s hard work in the 8-minute making-of here:
http://www.redbull.com/fr/fr/adventure/videos/1331661539177/skycombo-soul-flyers-behind-the-scene-video

On a production level it’s been complex to find the right tools, especially for the first phase of the jump between 10’000 meters and 6’000 meters. No helicopter can fly this high and the only way to capture the freefly routine was through gopros, and with the help of skydive extraordinaire Noah Banson who is the ‘official’ cameraman/photographer of the Soulflyers and executed the jump with them. I ended up picking the then brand new GH4 for the stunt; the weight was just fine for Noah (the camera was helmet-mounted and anything too heavy could seriously hurt his neck during the parachute opening, which was a no go), and with the right combination of Speedbooster adapter and wide angle lens, we managed to get a 16mm equivalent which is what I was after. We shot the jump in 4K, which gave a pretty comfortable margin to then stabilize the shots in post production for our HD master, getting closer to a 20mm field of view in the process and ultimately not fall into the “fisheye-adrenaline junky” aspect that is too common in action sports. Last but not least, the GH4 is well-built and seemed capable of resisting the super low temperatures for the duration of the freefall. An extra layer of neoprene for thermal protection was the final touch, and the GH4 functioned flawlessly under these extreme conditions, travelling 230 km/h in -50°c and still recording stunning 4K video.

Once again the project gave “team work” its true meaning, with oxygen experts, cameramen, mountain guides, heli and plane pilots all working together to make this project the success that is was. Not to forget the people @ Red Bull whose support and passion made it possible for Fred and Vince to set a new, high-altitude landmark in the world of aerial sports. Very well done, gentlemen.